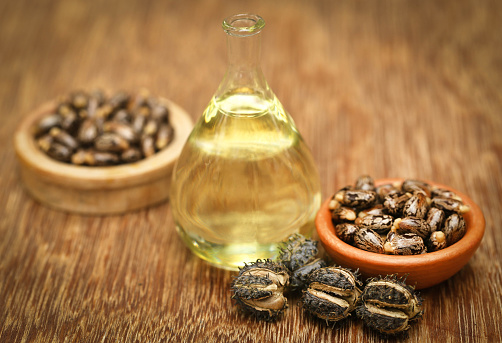 A quick, painless way to help the breast tissue detoxify from harmful estrogens and inflammation is with a castor oil compress. It is easily made by heating up a little oil in the stove, soaking a bandage in it, then compressing it to the breast/breasts. It is best done laying down for 20 minutes while you relax. But I know some women who wrap gladwrap around their bodies and compress and keep getting on with things. Here  are some other benefits of this simple tried and true oil.

Yes, castor oil is good when applied to the skin, but it is also used internally. By boosting the immune system and killing harmful bacteria, castor oil can help lower inflammation to prevent infection. How does it do this? Well, it has been shown that castor oil may help improve lymphatic drainage and rid the body of harmful toxins and  regulate the body’s immune responses.

In addition to improved immunity, castor oil benefits include the ability to naturally boost circulation and improve cardiovascular health. In fact, 90% of castor seed oil is an Omega 9 fatty acid, so it is healthier than industrial fats. “Research has shown that omega-9 fatty acids, commonly referred to as monounsaturated fatty acids, can help reduce the risk of cardiovascular disease and stroke.” Therefore, castor oil also benefits heart health.

Castor oil benefits include the ability to fight wounds and skin infections. Because castor oil is easily absorbed through the skin, this helps increase circulation and promote healing. In addition, it works as a natural antibacterial, anti-fungal, and antimicrobial agent to reduce swelling, fight inflammation, and prevent infection.

Yes, this amazing oil helps balance hormones, too. Castor oil benefits include the ability to balance hormones naturally. For example, it helps enhance the absorption of fat molecules in the digestive tract, which plays an important role in hormone production.

For centuries, castor oil has been used as a natural remedy to induce labor. It works by speeding up contractions. Thanks to the ricinoleic acid it contains, castor oil benefits include the ability to activate receptors in the uterus that stimulate contractions. I’ve experienced this first hand, it was a God send.

Castor oil works similar to coconut oil when it comes to healing skin conditions. Thanks to its antibacterial properties, castor oil benefits include the ability to fight bacteria that causes acne. To treat acne naturally, try applying castor oil to the affected areas using a cotton swab. You can also try mixing apple cider vinegar with frankincense essential oil and pure coconut oil. The ingredients will help reduce redness and inflammation while fighting off harmful bacteria.

Castor oil can be used as a natural treatment for toenail fungus, as well as moles and cysts. Simply mix a small amount of castor oil with a little bit of baking soda, then apply the mixture to the affected area to kill fungus and bacteria.